Finally, Some Good News Out of New Orleans

It looks like one of the most shady of New Orleans' pols is finally out of business. I am delighted to announce that New Orleans City Council member Oliver Thomas has pled guilty to federal corruption charges and should be resigning from his post effective immediately. Oliver Thomas and I share a special history, as he was the enforcer for Wal-Mart during the famous battle in New Orleans (for a quick overview, see "Wal-Mart: The Hits Just Keep on Coming"), the issue that gave birth to both the Urban Conservancy and the latent revolutionary inside of me.

The sad thing is that his crookedness was well known, although it was never said out loud. Part of the problem is that elected officials in New Orleans take on demigod status with the populace. City Council members get a vehicle, typically a luxury SUV or large Town Car and a driver who is an armed deputy. They have multiple staff people, all charged with keeping the unwashed masses out of their offices. The other problem is that there is all sorts of hand wringing now about the "loss" of this "popular" leader. The same sort of sadness that some have about Edwin Edwards going to prison. Go figure. 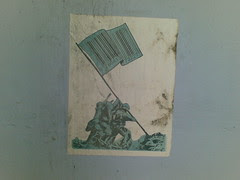 posters by town lake
Originally uploaded by Edward Melendez
Little stirrings of the soul of Austin bubbling up by Town Lake.
Posted by EMM at 9:17 AM No comments: