More Heartbreak From New Orleans (It just keeps on coming) 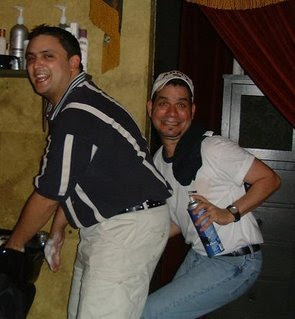 It's pretty incredible to write this on the heels of a happy little post about my last visit to NO.

Two people. Two stories. One story has a few years distance. One is now. This picture of horseplay at the hair salon is of two good friends of mine. On the left is Bobby Merrill, who died in 2003 of a heart attack at age 34. The guy on the right is Robin Malta. Robin was murdered in his Marigny home earlier this week. I had just visited Robin at his shop when I was in New Orleans a few weeks ago. Bobby was our "family" hairsylist, confidante and conspirator. Cassie and I would schedule both our haircuts on the same night with Bobby and make an evening of it. Bobby, Cassie and I would have drinks during the haircutting process (Bobby always had an amazingly steady hand, even after a few cocktails) followed by dinner out, often at Adolfo's in the Marigny. Robin worked at the same salon as Bobby and was Bobby's comic foil and friend. Robin was the one who broke the news of Bobby's death to Cassie. Robin was the hardest working man in hairstyling and opened up his shop on Decatur a few years back. Business was booming, he said when I last visited him. During the year that I was commuting to New Orleans for work, Robin cut my hair, often without an appointment and about 10 minutes notice from me. He always wanted to know when Cassie and Santiago were going to visit, and he carefully (politely?) studied the pictures of Santiago that I shared with him.

Both of these people are gone from my life forever. I miss these two people. The city is hard. I'm tired of being sad or scared for all the people I love in New Orleans.